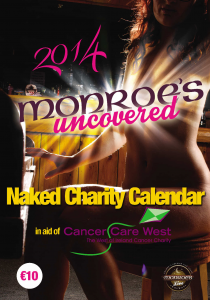 After a night’s festivities at her favourite live venue, Vernonica Ní Ghríofa happened to notice a rather odd thing.

All the staff at Monroe’s on Dominick Street were peculiarly handsome, males and females alike seemed to have killer bodies.

She declared aloud that they should all pose for a nudie calendar and it would be the easiest money you could raise for charity.

The bar man dared her to organise it. If she walked the walk, they would strip for the talk.

For most people, such madcap notions would be all forgotten about, consigned to the bin of great ideas conceived in over-enthusiastic merriment.

But not Veronica. The admin worker in the Irish Department at NUI Galway had always wanted to organise a charity event and following a few horrific deaths from cancer in her native Carraroe, Cancer Care West was the obvious choice for the charity.

“It was an off-the-cuff comment but it took wings and flew. I ended up taking my holidays to do the shoot over two days. I nagged loads of people to donate their time so everyone involved from the makeup artist, designer, printer and photographer did it for free.”

She roped everyone in the pub and live venue into the shoot – all 30 part-time and full-time staffers, aged 19 up to 45 – right up to the bosses – Fergus McGinn, Rob and Gary Monroe.

With no previous experience in managing a photo shoot, Veronica found the entire process exhilarating.

“The first shoot of the girls was a group shot, they were very nervous and very critical of themselves. By the second and third they weren’t so bad. For the older guys it was a case of ‘are you done yet’,” she recalls.

Her personal favourite is the August shoot highlighting the Galway Races with three male bar staff.

“I’m sure some will find it controversial but I think they all look so totally amazing,” gushes Veronica.

Written By Denise McNamara of The Connacht & City Tribune.